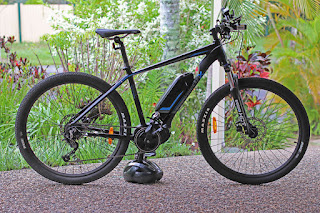 I moved to a suburb 12km farther out from work (now a 35km trip, 70km return), to a very hilly suburb with no protected cycling paths. I found that I was quite exhausted tackling the nearby hills on my road bike before I even got 5km out. I started cycling less, which ended up effectively being a two year break. I began looking at getting an e-bike so I could start cycling to work again.

I should also note that I live very close to a fairly hard core mountain bike course, and an easy ride to one of the better mountain bike trail areas in the state. I haven’t been a huge mountain bike fan, but the tracks are right there.

I looked around at a large number of e-bikes, eventually settling on the Ascent+29 by VelectriX. My reasoning included: a preference for the mid mounted motor, this bike seemed like good value, the somewhat larger 13.5Ah battery. There seems to be some confusion about battery capacity, the VelectriX site claims 13.5Ah, 99Bikes website says 13.6Ah, but the battery itself has 13.2Ah printed on it - embedded in what looks like the serial number.

I contacted VelectriX directly, who were pretty helpful, answering most of my questions. I asked how many teeth on the front chain wheel, but they didn’t know so I suspected it was the default 36, the Bafang site says there are three options: 36T 38T 42T. I also asked what a spare charger might cost, as I would likely need to charge at work as well as home. The guys at the retail store (99bikes) said that I should be able to make the trip both ways (70km) without the need for charging. Turns out this might not be true in my case. Note that the charger is bulky, but not particularly heavy, I could transport it in a backpack without issue if needed.

There are cables running under and outside the bottom of the mid mounted motor; is that safe? I could imagine a situation while doing the mountain bike trails that this area could easily get scraped. I didn't think that I would be doing that much trail riding, but I'll will update this blog if I start to notice any wear or damage.

There are no included headlamp or rear lights. The specs claim 21kg but after I added a small bag with tube and tools, a head lamp, drink cage, Garmin computer, Cycliq camera-light and arm mount, I get 23.8kg. It is possible that the naked bike was heavier than 21kg as I bought the large frame version, but I’m not going to dismantle my extra add-ons just to test this.

No place for the drink cage! Well, not the usual spots. I ended up with a cage that clamps on to your handle bars, which sounds insane but actually works quite well.

The quick-release on the front and back wheels were handy, although I only had to remove the front wheel to fit in the back of my VW Polo. Refitting the wheel took a little effort to line up with the hydraulic disc brakes despite the 99Bikes guys saying it will drop right in and you simply just clamp, I had to push on the wheel while engaging the quick-release.

The mini LCD display has the power button on the front (away side), you’re not going to accidentally power down, and plus/minus button on the back facing you. Holding the plus will active the backlight on the LCD display, holding the minus is the walk mode - pushing your bike along at a crawl. Tapping the minus/plus takes you down/up levels of assistance from 0 to 5. The LCD displays battery status in 4 bar levels, current speed, power assistance level, and trip distance. You reset trip distance by pressing the power and minus button together. The display can be tilted to adjust viewing angle. But that’s it, you’re going to want a GPS bike computer for detailed stats. I like using the Cycliq Fly12 arm that can hold your bike computer on top and your Cycliq Fly12 (camera and headlamp) below.

The fitted tyres are moderately knobbly, reasonable traction on the mountain bike trails where I found myself in full prolonged skid mode down two of the really steep descents. I have my eyes on a set of more road rolling 29” tyres as replacements when the current ones get to their end of life.

The seat is comfortable enough for me, however it keeps drifting downward as I ride, I need to adjust it up 3-5cm every hour of riding. I had this issue on my last mountain bike and solved it by clamping the rear reflector at the base of the seat post. Of course I could just lose some weight too, this might not be an issue for people under 95kg.

The Shimano Alivio thumb gear controls are excellent. Solid rapid changing with forward and backward push to change, and multi-change deep push for going to lower gears. My last mountain bike had a gear changer where you roll the handles … I’d avoid that type. There's only one cog on the chain ring, so all you get is 9 gears, which I initially thought might be a shortfall but works out to be plenty enough for everything except post 45km/h speeds. One less thing to monkey with while you're riding, and fewer mechanical things to go wrong.

Starting out, you probably should have the bike at level 0 or 1 assistance, because at level 5 you might place your foot resting on the pedals and accidentally push - suddenly the bike is off. Thrilling if you’re ready for it, not so much if you’re still in the garage aiming at a car. Note that I added caged / clipped pedals, just because that's what I'm used to and I expect this to be on the road more than trails. 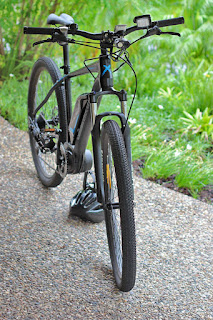 Because of the law, the motor assistance cuts when you go over 25km/h. My Garmin Edge 520 disputes the measured speed but it is very close. When you hit that limit then it is all you and you will feel every bit of the 21+kg of the bicycle, yes - just ease back and let the bicycle help. Remember that most climbs the motor is just assistance, you’re going nowhere fast if you try to let the motor take all the effort. You are still going to get plenty of exercise.

But the hill climbs are amazing. Hills that you know you would not be able to scale without hopping off are now in the realms of conquering, and hills that would have your heart pumping over 180bpm as you struggle and gasp are now so much easier.

I’m sure others must have discussed this, but you get used to the added power very quickly and start to wonder if the motor is on or helping at all. It is. Just set that assistance to zero and see how you go. I’ve only had the bike for a few days but for now it’s level 5 assistance all the time. Maybe as I get fitter I will back off the assistance. 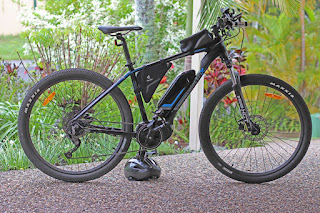 The commute to work was marred by misdirection, thanks to the lack of decent cycling infrastructure in my area. I have to run the rat maze of backstreets or do battle with aggressive work car commuters along the main streets. The local council has a very cool bicycle route planner that knows about all of the cycling paths including mountain bike trails. The planner’s suggestion was to take a direct path through a mountain bike trail, but as it was my first day out ... I’m not doing that, I tried the backstreet route. Half way out of the hills, tired of getting the turns wrong, I switched to the Google maps app, with the cycle option, because I wanted turn by turn, however this was near fatal as I was directed onto the most dangerous and cycling unfriendly road in the area, away from the bike paths and trails. Google might consider some way to fix this. I finally made it to the cycle path that took me the last 25km all the way to my destination. The Bafang max drive smoothed out the few nasty hills along the way, and brought a smile to my face. This ride was pretty damned sweet. 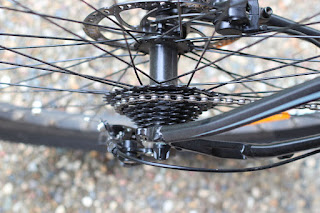 On the down hill sections and the flats, I could keep the VelectriX cadence up to a maximum of about 40 to 45km/h using the highest gear. For comparison, on my carbon road bike I can keep pedalling at 55-60km/h thanks to nice large chain ring. I noted that I started to feel somewhat unsafe on the VelectriX at 55+km/h, compared to 70+km/h on the carbon. Clearly mountain bikes aren’t high speed, this is nothing new.

After a ride of 38km of road travel on the VelectriX using level 5 assistance all the way across a good amount of hills, the LCD screen showed the battery level at next to empty. Not really 70km to 110km. The recharge took just under 4.5 hours which was a little more than the advertised max charge time of 4 hours, so I’m guessing the battery was about completely discharged.

After the recharge at work, the ride home was in high humidity and heat. I passed only one other rider who was also on a mountain bike and was very interested in the electric motor. He was surprised at the price, he may have been looking at brand name e-bikes which seem to start at twice the cost. By the time I got home I was exhausted, slapped on the charger and went for a shower then a nap.

The following weekend I thought I might check out the mountain bike trail, because of the commute shortcut potential. The trails wound through beautiful forest with wallabies bouncing about, hill climbs, wide tracks - it was actually wonderful. The motor assistance was excellent. I am sure I had a smile plastered to my face, even on some of the scary downhills. I really wanted to do that ride again this weekend, however a huge rain system settled in, and the region is under a flooding alert. Of course.

E-bikes add fun to cycling by removing part of the drudgery. This is early days for me on the VelectriX, but I love the ride and how the assistance has opened up routes that I would have previously avoided. I am not particularly happy with the battery life (more testing required), the battery efficiency will improve when I fit better road rolling tyres, and as I get fitter and lighter, not so lazy (level 5 assistance all the way!). The real tell is that every time I ride this bike I am smiling.

Bafang Max Drive review by the great guys at ElectricBikeReview.com

Also see a review of an older model of the Ascent+ (rear wheel motor) by ElectricBikeScoop.

UPDATE: Velectrix no longer sell this model. Still plenty of good options but, sadly, they all appear to be rear hub motors. I think this is likely a result from the issues that I started having with batteries on my mid-drive. My battery was not charging, completely lost its charge, and eventually refused to recharge. Over a few months, Velectrix swapped my battery twice, and on the last time said that the on-bike charging mechanism is not usable. So I charge and store the battery off the bicycle until I want to use it - problems solved, and not an issue for me in subsequent months of usage (so far). So while this is not ideal - I am happy, and very happy with the service from Velectrix.
at February 24, 2018 2 comments:

Below are the books that I read during 2018 and my rating out of 5 Rating Title Author Length 5 Raze: Completionist Chronicles Series, Bo...